Misconceptions About Solar Energy Cleared Up

When the topic of solar energy is brought up, there seem to be many common misconceptions. In order to better understand what solar myths exist, we conducted a survey of 1,000 people who have either had solar installed, or have researched having it installed, and posed several questions around their experience.

To help you better understand the realities of going solar, we’ll go through our survey findings and set the record straight on solar panel myths.

We asked our participants to rate their hesitations for going solar from high concern to no concern. Cost and lack of information were two of the highest concerns that may prevent people from installing solar systems. Let’s address these initial hesitations. 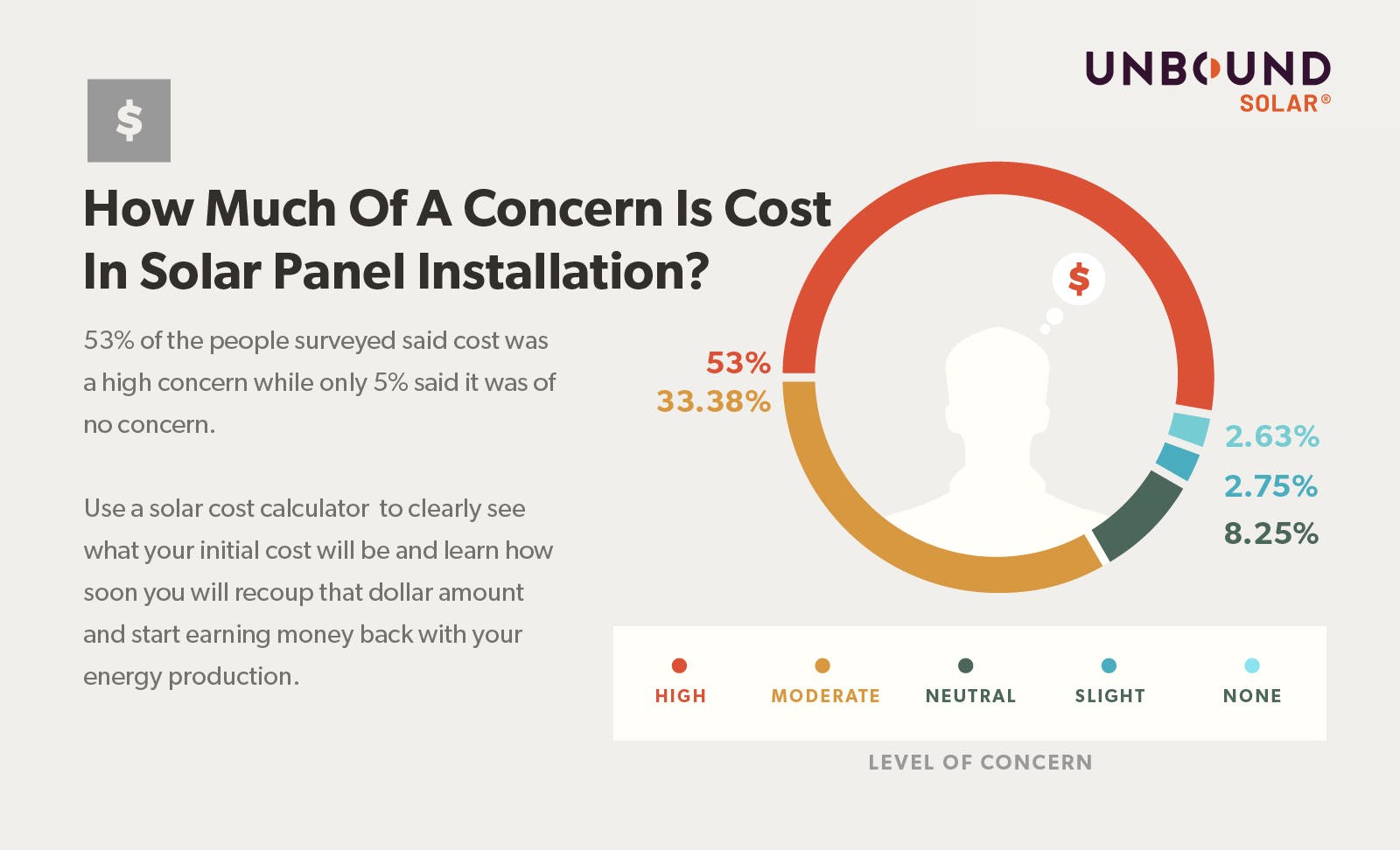 The overwhelming top concern about going solar was the cost. 53% of the people surveyed said cost was a high concern while only 5% said it was of no concern.

Although there is an initial investment, going solar actually results in cost savings. A reduced electrical bill means saving money every month. Over time, this investment will pay for itself and begin to turn a profit. There are also solar tax credits and incentives that encourage you to go solar and make it more financially attractive.

Since each solar project is unique, the cost varies depending on the needs of your installation. Use a solar cost calculator to get a better understanding of how much your solar system might run you. Being able to clearly see what your initial cost will enable you to see how quickly you will recoup that dollar amount and start earning money back with your energy production. 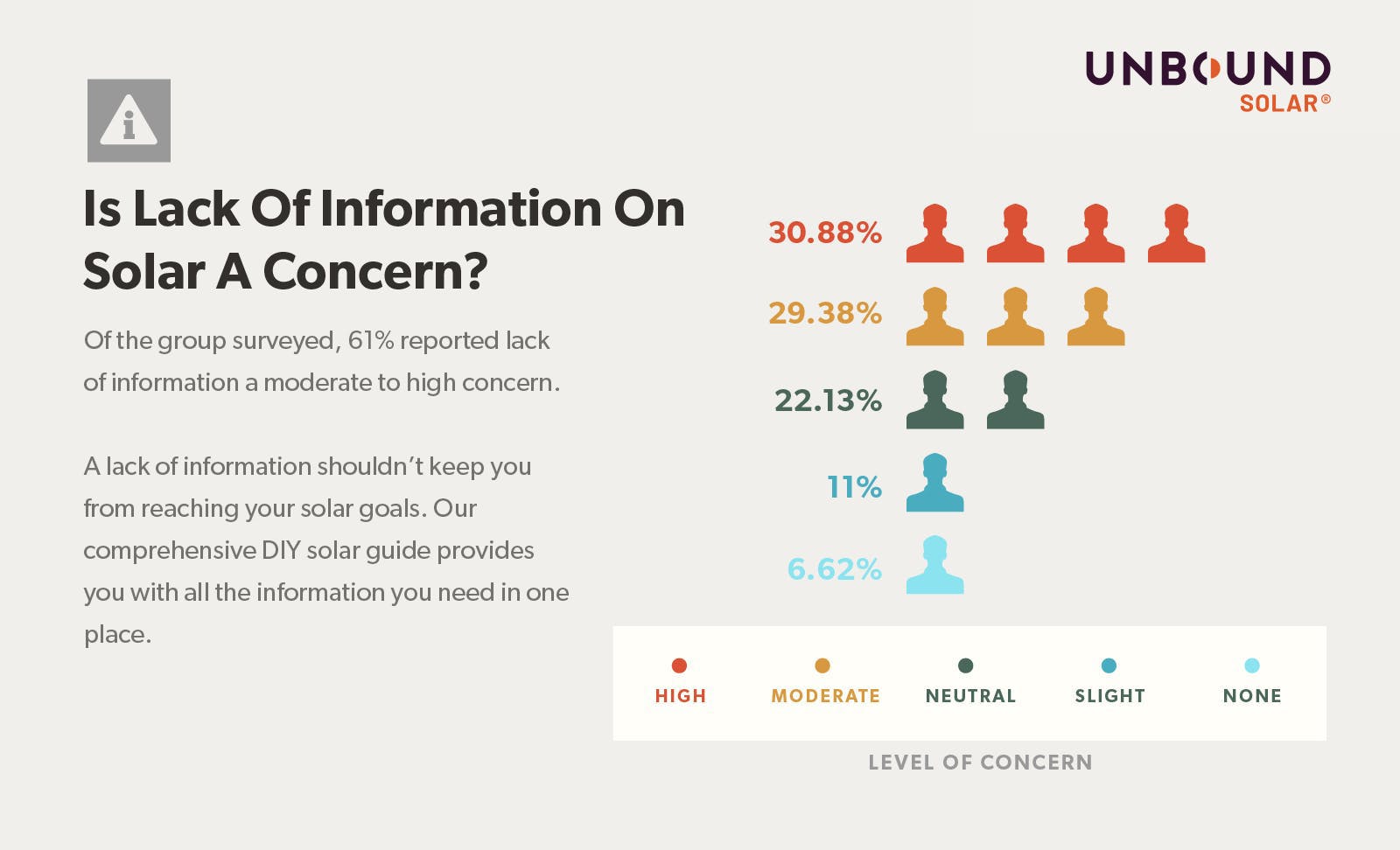 A lack of information shouldn’t keep you from reaching your solar goals. Our comprehensive DIY solar guide provides you with all the information you need in one place. Whether you decide to build it yourself, hire local laborers, or do a combination of the two, you can take control of your solar installation. Utilize our guide to help you learn everything you need to know to successfully go solar.

How Long Will It Take Me to See ROI? 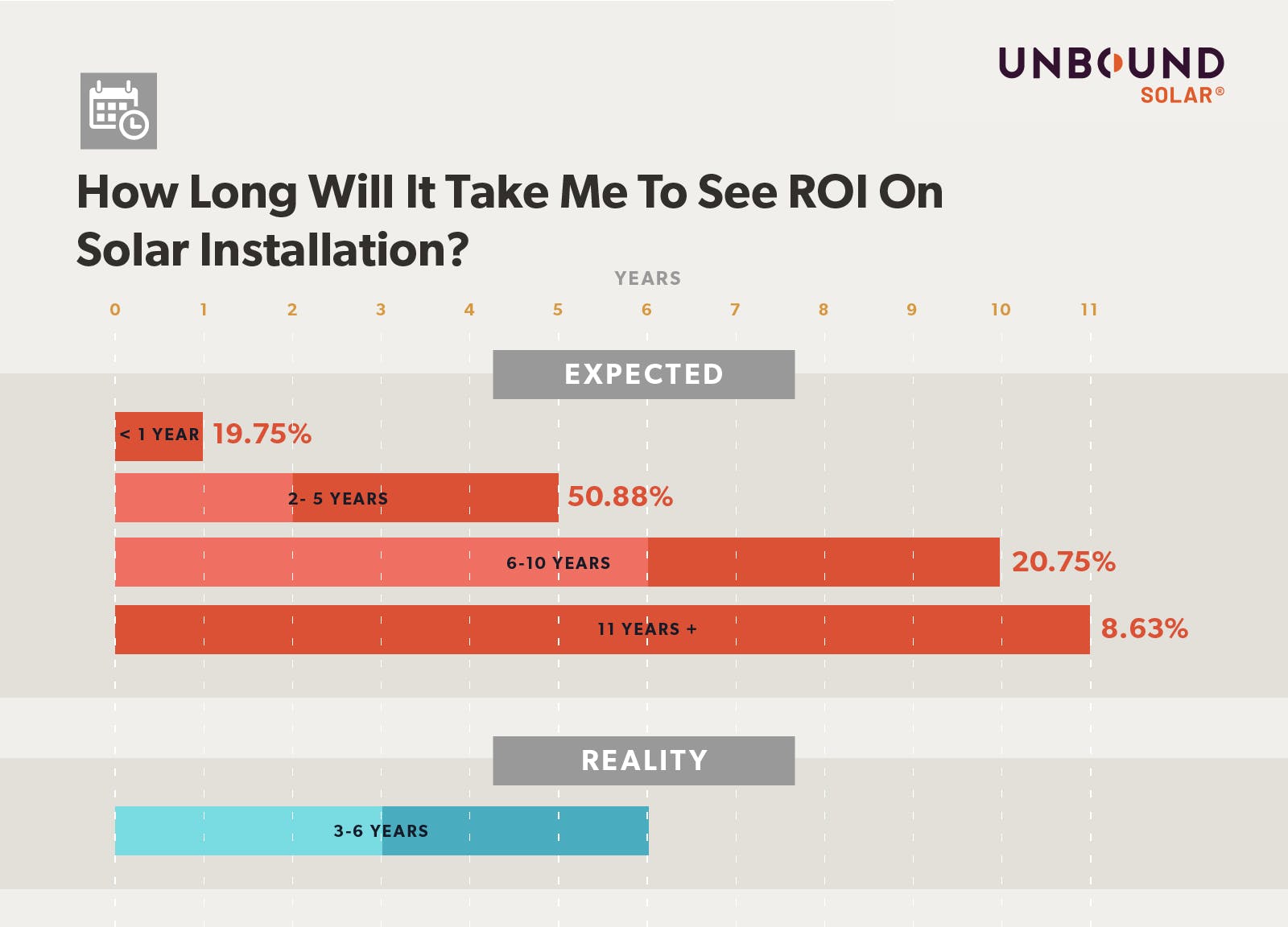 The fact is that most grid-tied DIY solar systems pay for themselves in about 3 to 6 years. If you hire a contractor, it can be around 5 to 9 years. Since solar panels are warrantied for 25 years, once your system has paid for itself, you’ll enjoy years of profit on your investment.

To take the guesswork out of whether or not solar panels are worth it, you can calculate your payback period and solar ROI. Keep in mind that state and federal tax incentives accelerate your time to returns on your original investment.

Solar Panels Are Effective Regardless of Your Climate 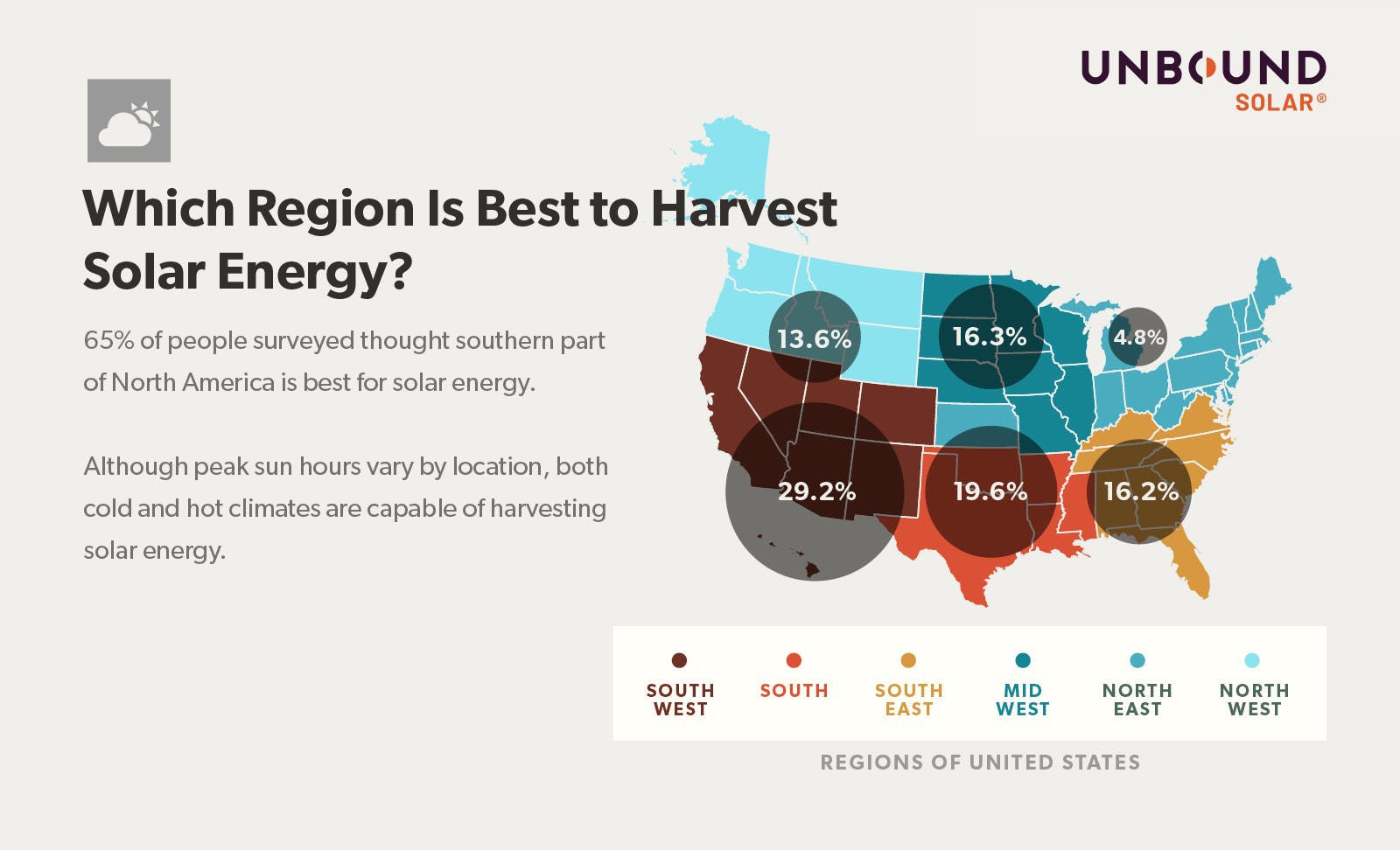 An interesting misconception about solar energy we discovered in the survey was that 45% of people surveyed thought solar panels do not work in some climates. Another 33% of respondents were unsure.

Although peak sun hours vary by location, both cold and hot climates are capable of harvesting solar energy. To get a better idea of how many sun hours you get where you live, you can refer to a sun-hours map.

There are also numerous ways to maximize your solar panel efficiency. Selecting the most efficient solar panel is important, but you’ll also want to be sure to install the panels strategically and properly care for them over time. 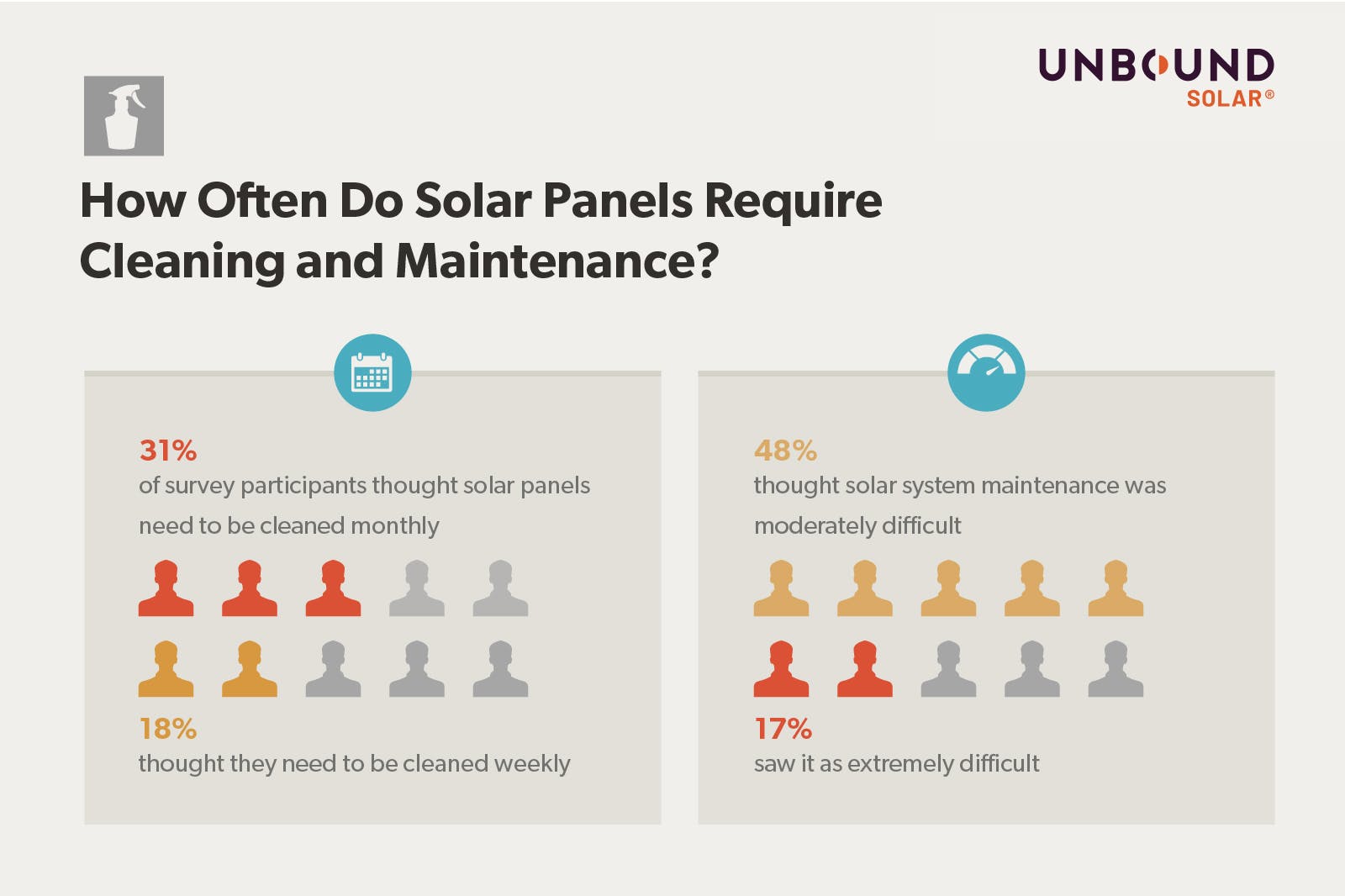 Another solar panel myth is that solar panel cleaning is needed often, and maintenance is difficult.

On top of that, 48% of those surveyed thought solar system maintenance was moderately difficult and 17% saw it as extremely difficult.

In reality, solar panel cleaning and maintenance aren’t very complicated. Of course, you’ll want to take care of your solar panels and system to ensure everything functions well for years to come, but following a few best practices for solar panel maintenance will ensure this is the case. 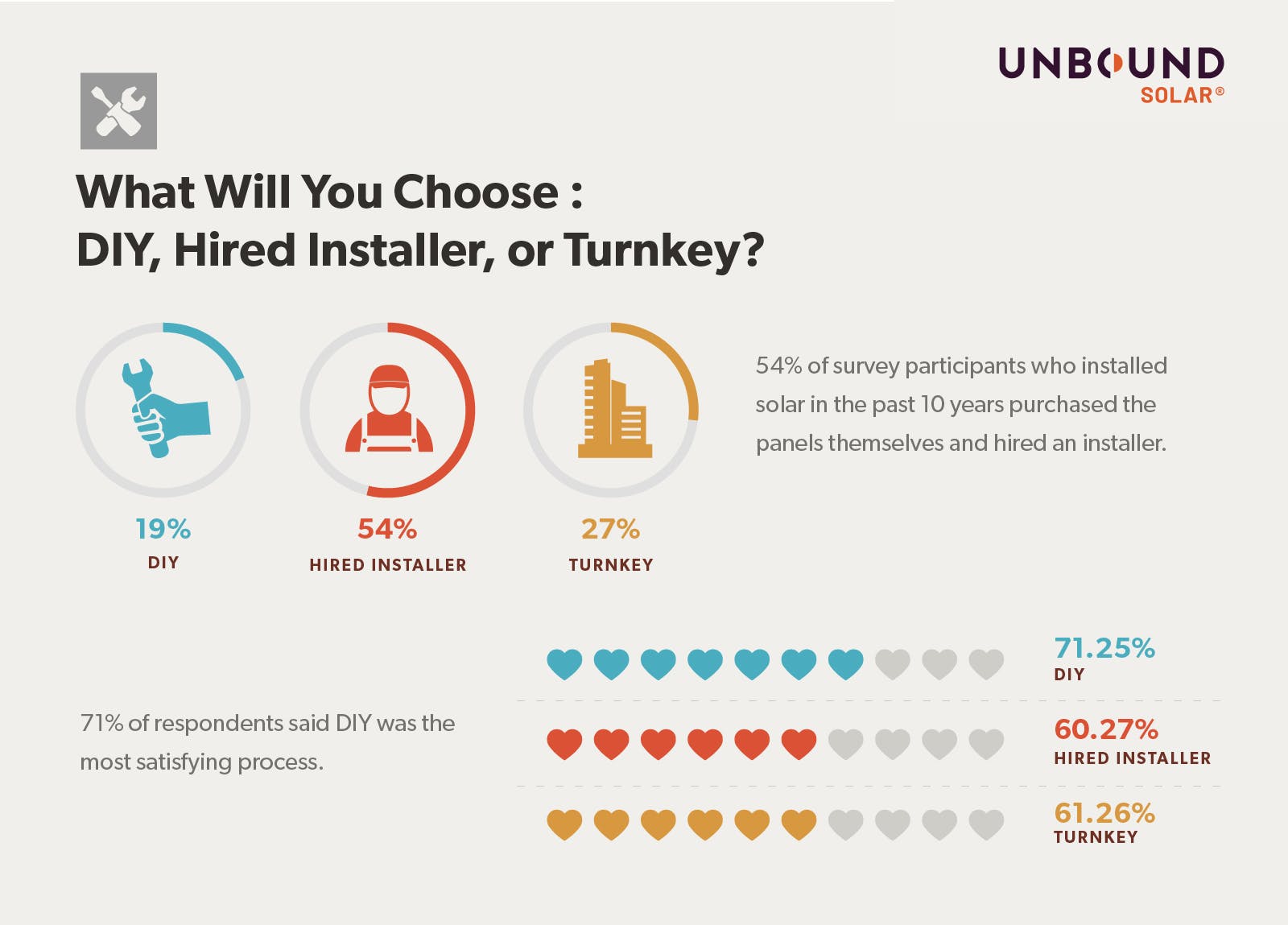 We asked survey participants who installed solar in the past 10 years how they did it. Interestingly, 54% purchased the panels themselves and hired an installer.

Then, we asked those same participants which process they would choose now if they were to do it again. For those who did DIY the first time, a resounding 71% would do DIY again.

Of the participants who purchased the panels and hired an installer, 61% would again go this route.

For those who used a turnkey company, 61% said they would do it again. But, 29% of people who opted for turnkey the first time said if they were to do it again, they would purchase the panels and hire an installer instead.

These findings suggest DIY solar installations result in the greatest satisfaction. Regardless of how solar was installed, 98% of people surveyed would opt to install solar again. Before you decide which route to take, it’s important to understand what’s involved in a DIY vs. contractor install.

Factors to Consider When Owning or Renting Your Home with Solar

Whether you own or rent, going solar impacts your home. In our survey, we wanted to uncover what solar myths exist with regard to both owned homes and rented properties. 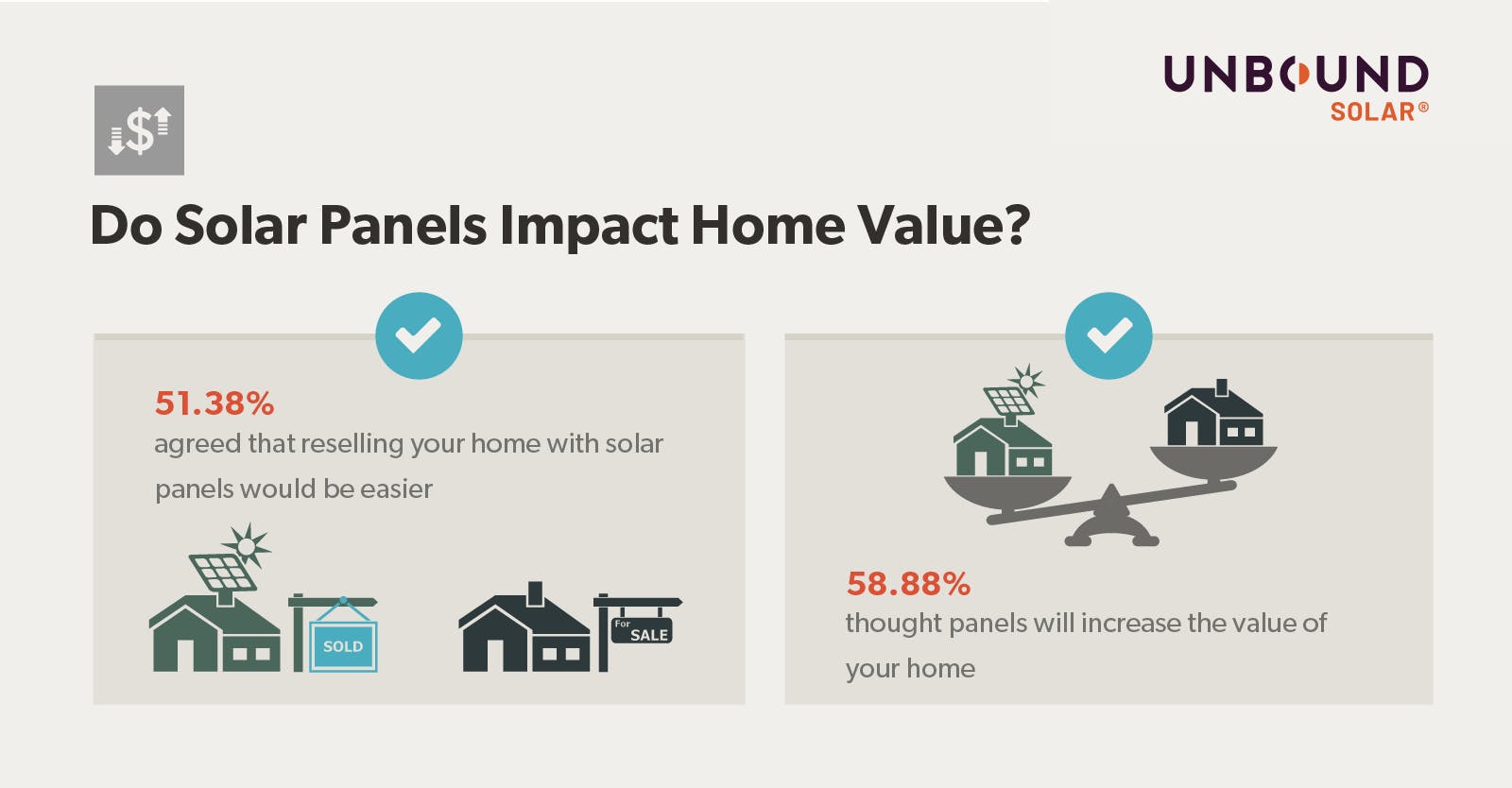 Even if you don’t live in your home long enough to reach the payback point, the higher sale price you can command with solar could more than cover your investment.

Going Solar When You Rent or Lease Your Property

Although most people associate residential solar systems with homeowners, renters do have options. While your landlord may not allow you to mount solar panels on the roof, there are other creative ways to tap into renewable energy.

Modular and portable systems can make solar panels for renters possible. There are a variety of systems that require little to no installation processes. Some specialty kits are even capable of being placed on balcony railings, window ledges.

Beyond these systems, there are renewable communities you can join remotely, investment options in the solar industry, or solar chargers for small appliances. There are many ways to participate in solar energy as a renter. 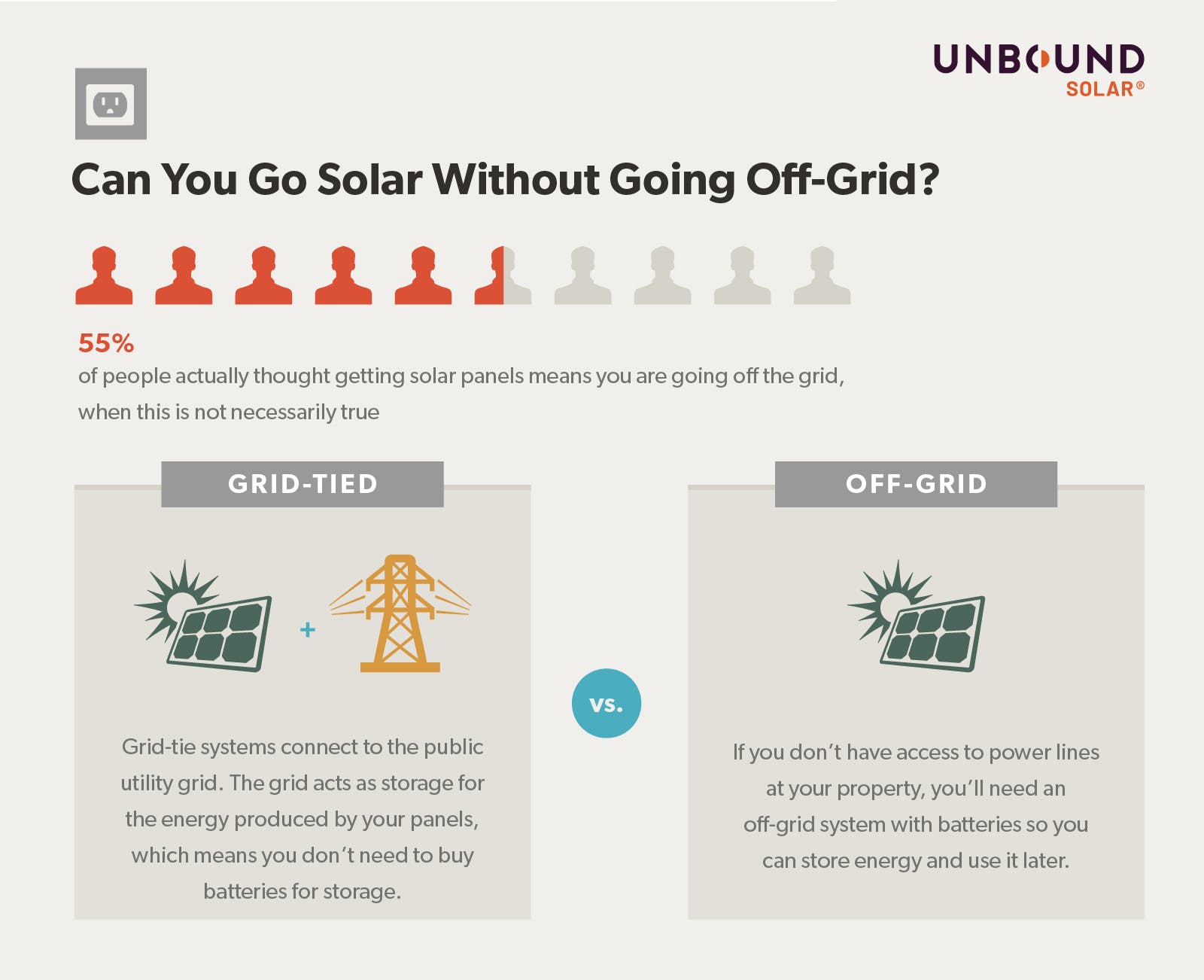 Some of the most prevalent solar panel myths come from a place of misused or misunderstood terms. We asked our survey participants if going solar means you’re going off-grid. About 55% found this statement to be pretty accurate.

Going Off-Grid Is Not the Only Way to Go Solar

Going off-grid might be a good option for projects that aim to be completely self-sufficient or are in remote locations. But, grid-tied solar power systems tend to be the more popular choice for a number of reasons.

A grid-tied system provides many of the same benefits of an off-grid system, but without some of the drawbacks. With a grid-tied system you lower your electricity bill, can sell surplus energy back to the grid, and you have a backup energy source in case of blackouts.

It’s important to evaluate grid-tied vs. off-grid solar so that you select the best system for your project. There are times, however, when going off-grid is desirable or necessary. In that case, using an off-grid system sizing calculator can help you determine the appropriate system size you need.

Expired Solar Panels and the Environment

We asked our survey takers their view on the statement solar panels are bad for the environment after they’ve expired. Of the respondents, 19% said this statement was true while 37% were unsure. Let’s get some clarity on this front.

An expiration date doesn’t always answer the how long do solar panels last question. Although the typical warranty for solar panels lasts 25 years, many solar panels outlast their expected lifespan and continue to produce energy long after their warranty expires. 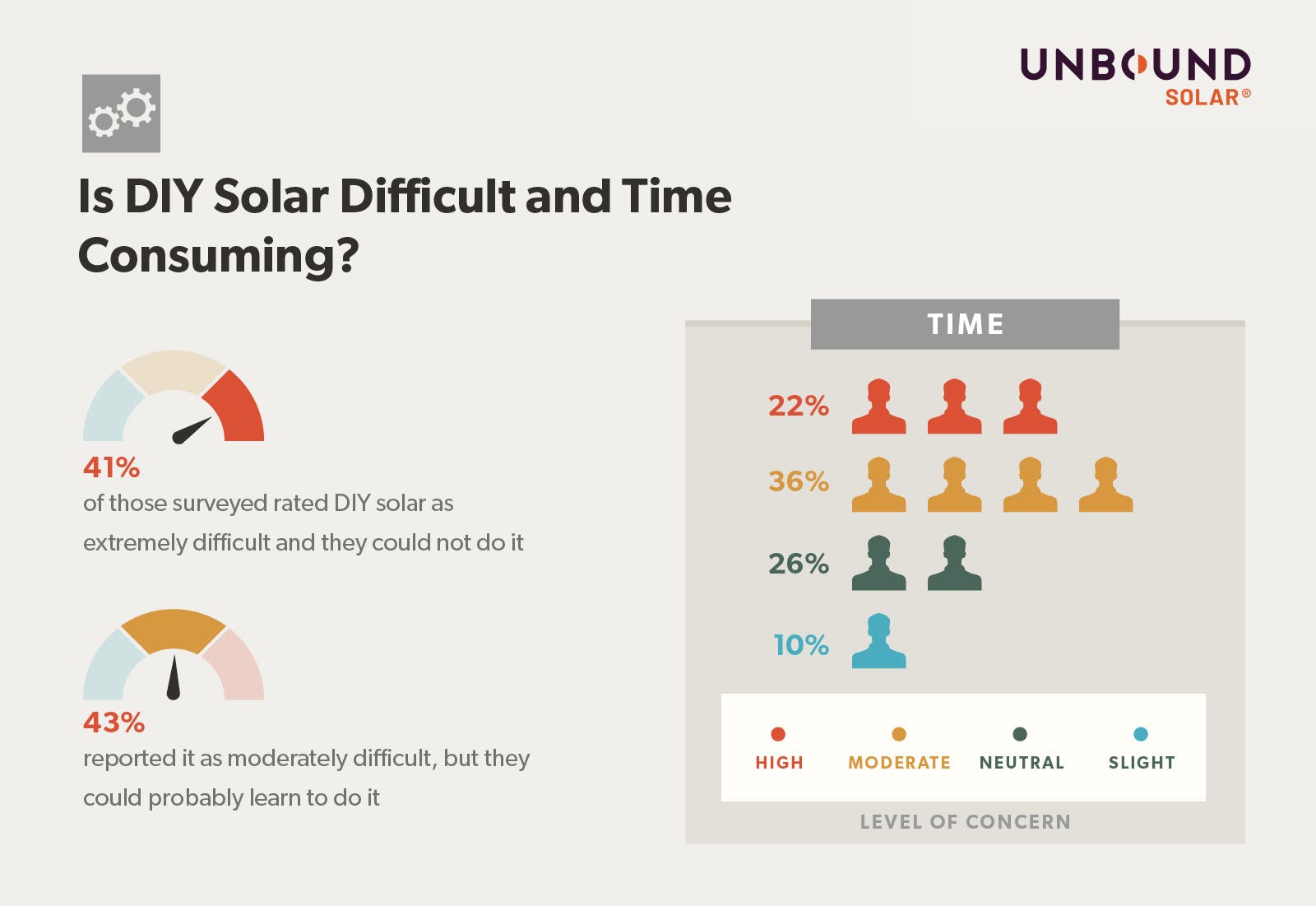 Any process that you haven’t done before can seem difficult. We’re here to help make it easier. By taking your DIY solar installation step-by-step, you can save money and surprise yourself by how handy you really are. Remember that our survey showed the majority of people who installed solar themselves would do it again.

While it may take some time to plan and install your solar system, you have options that can minimize this. By leaning on our team of highly experienced design consultants, we can collaborate with you and ensure your project turns out exactly like you envisioned. Handing off the installation portion of the project to local installers can also shorten your time commitment.

Anyone is capable of DIY solar with the right information, guidance, and a willing attitude.

Our survey results confirmed that a number of solar myths exist. Now that we’ve debunked some of the biggest misconceptions about solar energy, you should have a better understanding of the facts. Accurate information will help you move forward with your solar projects by allowing you to make informed decisions.

Ready to take the next steps towards going solar? Our free Getting Started Guide is a great resource to help get you on your way.

When we design off-grid solar systems with lithium batteries, we…
Read More >

The Ultimate Guide to Living Off the Grid

Life is all about new adventures. And living off the…
Read More >